I have a solution that contains 2 projects:

xxxMode2 can be built as an independent desktop application. xxxTable project is a launcher. I will call xxxMode2 from xxxTable. 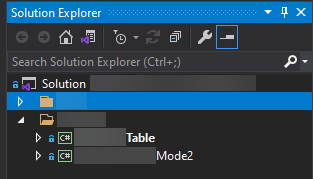 In C#, what are the difference between calling a sub-project from a main-project between using the Classic way (code A) and the Process way (code B)?

I use this ProcessStartInfo() method when I want to launch an exe extern to my code. Is it correct, or make it sense, to do it from my main-project to my sub-project?